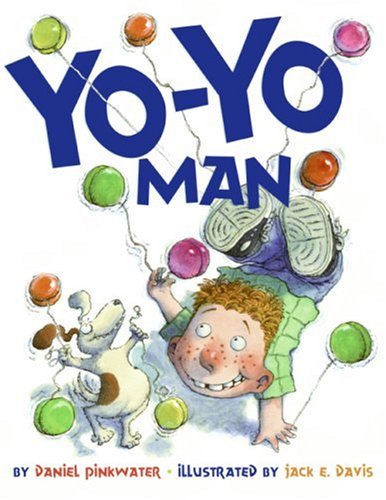 Third grade is going to be ugly,” moans the anonymous narrator of this caper, a sort of self-esteem parable souped up on comedy. “Cinnamon-Red-Hots-candy-sucking” Richard Newton, who has already twisted his arm, snags the seat behind him, and poodle-haired Mrs. Mousetrap starts right in with spelling and math tests. But at recess the mood begins to change when an exuberantly ducktailed impresario who goes by the moniker Ramon: World Yo-Yo Champion sparks a schoolwide yo-yo craze. Not only does he decide to become a “yo-yo go-go, with yo-yo know-how” (and, “for good measure,” a master speller who can “make mincemeat out of Mrs. Mousetrap”), but he also discovers that inside his bully is a big baby bawling to get out. Pinkwater knows in his bones how kids think and talk, while Davis’s sweetly grotesque cartooning conjures up a motley crowd of supporting players, most with their own loopy personalities. As in , these two wits can keep an audience agreeably suspended. Ages 4-8.