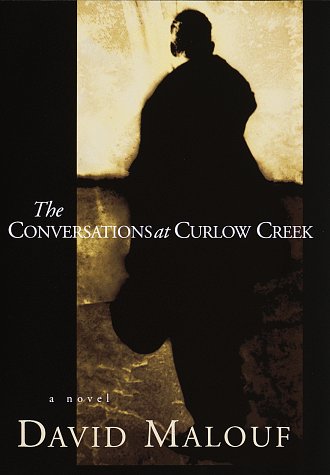 The Conversations at Curlow Creek

Two men spend the night in a hut in the vast, bleak western highlands of Australia in 1827. One is a convicted felon, a captured member of a gang of outlaws working to foment a rebellion among the colony's oppressed natives. The other is his nemesis, an officer charged with hanging him at dawn. Through their halting conversations, the confluence of their very different lives takes on a mythic quality. Both are exiles from their native Ireland, though from different social strata. The prisoner, Daniel Carney, accepts his fate with stoic dignity, though he mourns the death of the leader of his band, a charismatic fellow known as Dolan. The military officer, Michael Adair, has reason to think that Dolan was really Fergus Connellan, his beloved boyhood friend and adoptive brother with whom he was raised on a beautiful estate. In a series of reflective flashbacks, Adair's relationship with Fergus is revealed, as well as Adair's love for Virgilia, a spirited young woman from a neighboring estate, who loves Fergus instead. Malouf relates his complex story slowly, with more interior monologues than direct action. The narrative acquires power as the deeply pessimistic Adair is forced to acknowledge the forces that have shaped his personality and that of his friends, and the consequences that now lie in wait. Malouf (The Great World; Remembering Babylon) raises existential questions about moral order and justice, depicts the contrast between rich and poor in Ireland and Australia and lyrically describes the landscapes of both countries and the spirits that abide there. The accretion of precise detail rewards the reader with resonating insights. And the surprising epilogue, with its two spiritual resurrections, offers a rich and satisfying denouement. Author tour. (Jan.)
close
Details