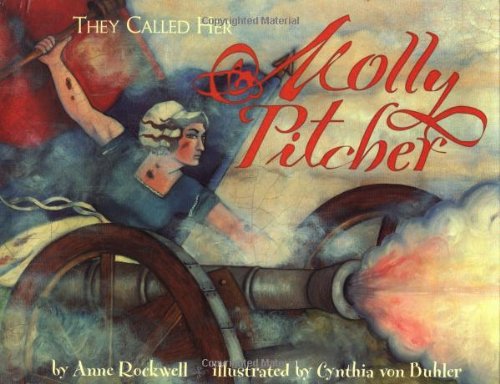 THEY CALLED HER MOLLY PITCHER

George Washington made her a sergeant in the Continental Army for her bravery, and Rockwell () gives her star treatment in this stirring picture book biography. She's Mary (better known as Molly) Hays, and in 1777 she followed her husband to war and straight into the annals of American history. After surviving a winter at Valley Forge, Molly continued on with the remaining soldiers to the Battle of Monmouth (N.J.), fought on a sweltering June day. Molly spends the day fearlessly "dodging cannon and musket fire" to bring pitchers of water to heat-stricken soldiers and, later, manning the cannon left by her injured husband. Without sacrificing the dramatic momentum, the author also assesses the Americans' military tactics and training (or lack thereof) versus British expectations and mores (despite temperatures approaching 100 degrees, British soldiers wore fur hats and heavy wool suits). Rockwell finds opportunities for humor (in later life, it seems, "the only fault her employers ever found with her was that she swore like a soldier") and for her own opinions (after Washington honors Molly, "no soldier sneered at the thought of a woman being a sergeant in army"). Von Buhler () works in a folk-art style, and flat perspectives, sturdy brushwork and light crackling effects give her paintings a colonial look. The type, unfortunately, can be difficult to read, set on a rustic, linen-like background—a minor flaw in a memorable book. Ages 7-10.