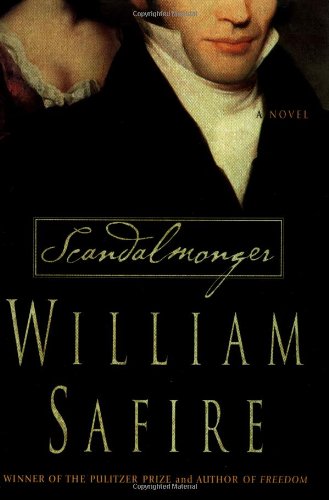 Grammar maven, Pulitzer Prize-winner, novelist (Freedom) and erudite political columnist Safire delivers a sprawling, fact-based if somewhat stiffly written novel that will acquaint readers with several of the nation's first political scandals. In light of the recent White House brouhaha, it's fascinating to learn that in the days of the founding fathers, politicians were just as licentious and newspapermen even more scurrilous than some players in contemporary media. The narrative chronicles the career of James Thomson Callender, a Scottish immigrant pamphleteer whose sensational exposes of the private lives of public men destroyed reputations and altered the course of U.S. history. It is Callender who breaks the story about Treasury secretary Alexander Hamilton that forces Hamilton to admit to adultery in order to protect his business reputation. Later, Callender is charged with sedition, for issuing ""a statement intended to incite the hatred of the people toward their government leaders."" But he is not deterred from subsequently disseminating the story of Thomas Jefferson's liaison with his slave, ""Luscious Sally"" Hemings, herself the offspring of Jefferson's wife's father and a mulatto slave. Meticulously recreating the stories and dialogue from diaries, newspaper accounts and court transcripts (there are several trials involving libel), Safire delivers nicely rounded portraits of Washington, John Adams, Hamilton, Jefferson and Aaron Burr. Callender's own suspicious death closes the tale, a case of real life providing grist for melodrama. Always meticulous with facts, Safire adds an epilogue chronicling the fates of the major characters, followed by more than 50 pages of detailed notes and sources and a bibliography, all of which will be catnip to history buffs. Despite its heft, the novel moves along at a good clip, since Safire's use of short chapters, snippets of dialogue and frequent changes of scene creates narrative momentum. Agent, Lynn Nesbit. (Feb.)
close
Details