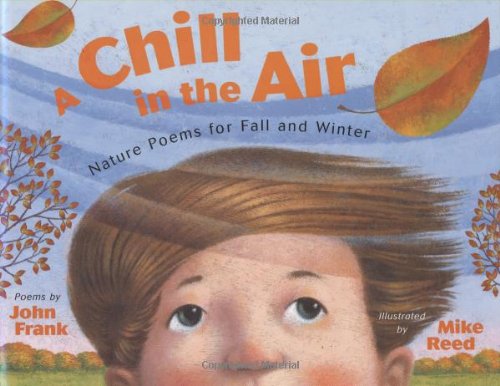 A CHILL IN THE AIR: Nature Poems for Fall and Winter

Frank's ( ) brief rhymed poems in this two-season celebration mine the timeless and often ask readers to reexamine the familiar. "Thief," for instance, begins with an oft-used phrase, then refreshes it with a twist: "The winter wind's a clever thief:/ He'll join with you in play,/ Then slip his hand inside your coat/ And steal the warmth away." Reed ( ) emphasizes the lightness by picturing a child bundled up from head to foot with outstretched hands that welcome the blustery weather, flanked by his faithful dachshund, clad in a red sweater. The artist uses the boy and dog to unite the collection, as well as subtle horizontal lines that undulate across the spreads, creating an understated pattern. Reed also takes some beguiling liberties with the occasional still life. "Mushrooms," for instance ("Along the shady forest floor/ As summer's long days wane, / The mushrooms pop up, wearing hats/ To shed the autumn rain"), occasions an almost Cubist depiction of leaves, from which mushrooms of violet, burgundy and melon-green hues spring up; Reed somehow makes them look perfectly natural, despite their fantastic colors. A few playful poems round out the more reflective nature pieces (a witch out on "A Cold October Night" should remember to wear thermal underwear; polar bears sunbathe in the snow during their "Polar Vacation"). A frolicsome introduction to the seasons. Ages 4-8.