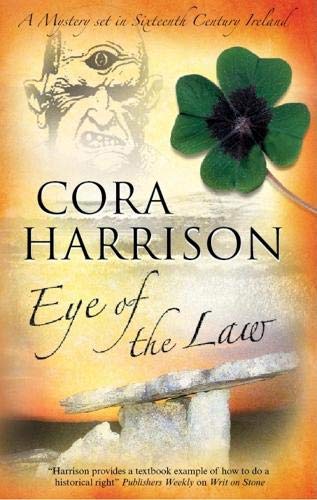 Eye of the Law

Set in 1510, Harrison's excellent fifth Irish historical (after 2009's ) finds series heroine Mara, the of the kingdom of the Burren who serves both as an investigating magistrate and law school professor, married to King Turlough Donn and expecting his child. When two strangers arrive from the Aran Islands to announce that one of them, 20-year-old Iarla, is the previously unknown son of local noble Ardal O'Lochlainn, they cite as evidence the dying confession of Iarla's mother. That statement, under existing law, is considered the most sacred of deathbed oaths. Since Iarla and Ardal don't resemble each other, Mara decides to wait two weeks before rendering her verdict on their relationship. Soon afterward, someone kills Iarla by poking a knife or stick into one of his eyes, leaving the body outside a cave reputed to be the home of a malevolent one-eyed god. Harrison smoothly integrates the legal system of 16th-century Ireland into the story line.