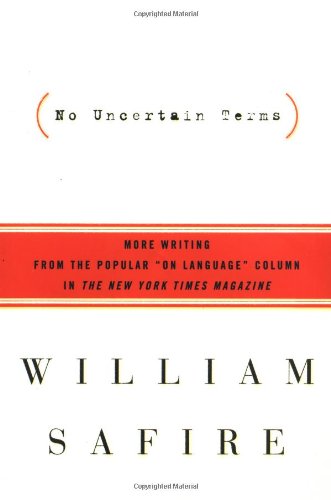 NO UNCERTAIN TERMS: More Writing from the Popular "On Language" Column in the New York Times Magazine

For over two decades, Safire's "On Language" column for the has made him probably the most widely read commentator on the English language today, and he has turned those columns into more than a dozen books (, etc.). There is no one more adept at dissecting lexical linkages, spotting linguistic lapses and tracing coinages. In this outing, he brings back columns first published between 1997, and 1999, a period rife with words relating to "Clinton's Monicagate." For instance, the mistakenly recorded Monica Lewinsky's gift to the president as a "chochki." What Safire calls "linguistic lawyering" got the record corrected to read "tchochke." Safire notes, "Ms. Lewinsky gave it the proper English pronunciation, and the transcriber took the spelling of the final vowel from that." Probing puns and neologistic splinterings such as , Safire covers computerese, examines euphemisms, considers the propriety of new compound words ("something there is that doesn't like a hyphen"), takes issue with the vogue of "having an issue" and sallies with slanguists. We learn that the verb may be related to the German dumpling called . Here are words from Web sites, politicians, Pentagonians and other phrasemakers. The columns are often followed by reader reactions, and these informative responses can veer into invective or erupt into hilarity. Throughout this cornucopia of columns, stimulating, scholarly and thought provoking, Safire remains a witty wordsmith, even in his closing acknowledgments: "I stand on the shoulders of giants. (Nobody stands on the shoulders of midgets; that would be cruel)."