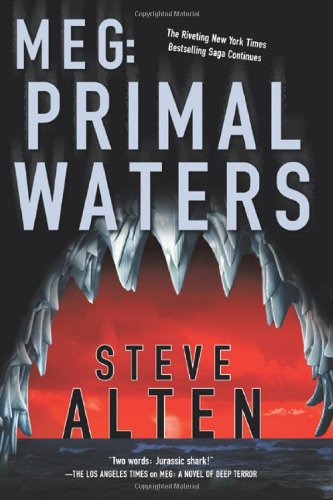 The giant prehistoric shark, , that put Alten on bestseller lists with his debut novel, (1997), and its follow-up, , returns in a messy, exuberant, potboiling action thriller. It's 18 years since Angel, spawn of the "meg" in , chomped her way through many humans (as well as through most critics' sensibilities); her nemesis, Jonas Taylor, is now 63—and in financial trouble. For money and perhaps a retaste of youth, Jonas agrees to star in a top-rated reality series, , unaware that a meg-lover who's envious of Jonas's fame plans to feed Jonas to a meg lured to the middle of the ocean. Meanwhile, Angel returns to her California hunting grounds and another meg creates havoc on the coast of Washington State. The narrative runs in overdrive from start to finish, as Alten munches on the reality show phenomenon, ocean ecology and family issues (tensions among Jonas, his kids and his wife), but all those are merely the fibers connecting the novel's powerful muscle: the shark attack scenes, which are numerous and exciting and, toward the end, intercut as frantically as an MTV video. This title probably won't sell as well as Alten's first two novels, but the novelty of an aging action hero adds general interest, and the author's many devoted fans should devour it.