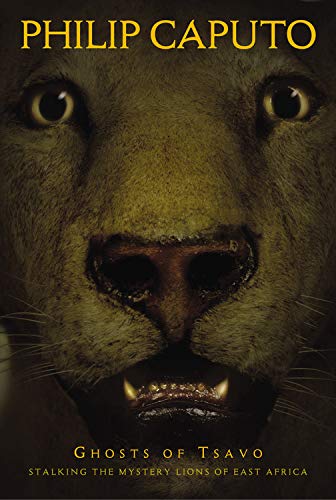 GHOSTS OF TSAVO: Stalking the Mystery Lions of East Africa

In a reasoned, researched account, Caputo (; ; etc.) lays out the myths and scientific evidence surrounding a variety of maneless male lions in East Africa that prey on human beings. Two such lions gained infamy in 1898 when they devoured well over 100 Indian and African workers enlisted by the British to help construct a bridge over the Tsavo River (the 1996 movie was based on the same subject). The book's most remarkable asset is that, given the alluring subject matter, Caputo keeps things on an even keel. That doesn't mean, though, that the writing doesn't bring home the real terror of considering "a complex human being, with a unique identity, with hopes, ambitions, and desires just like yours, reduced by a creature with a brain slightly larger than your fist to nothing more than a few fragments of bone and a bloodstain on the grass." Caputo travels with two different sets of scientists on either side of a theoretic divide: is the lack of manes on these males to be explained by environmental pressures, or are they genetically distinct from the lions in the rest of Africa? The latter would be a stunning development as there are currently only two recognized species of lion in the world. Caputo doesn't aim to solve the mystery here. Rather, he methodically provides the arguments on both side while taking readers on a virtual safari as he observes the scientists at their work. The result is an engrossing book that mixes high-quality travel writing with an intriguing mystery and an in-depth look at the scientific process that tries to grapple with it.