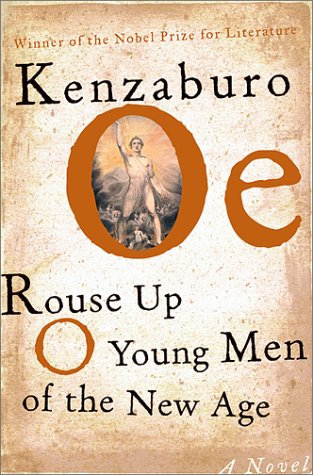 ROUSE UP O YOUNG MEN OF THE NEW AGE

Writing once again with depth and passion about his relationship with his brain-damaged son, the Nobel laureate transforms his musings into a full-blown narrative that becomes a thoughtful yet provocative study of the nature of human relationships, filtered through the author's fascination with the writings of William Blake. The story starts in familiar territory as the narrator, "K," replays the heartbreaking realization that "Eeyore" has a bizarre form of brain damage that may actually be a malformed second brain. He grapples with his son's disturbing behavior, delving into such basic human concepts as death and suicide. K also deals with the reaction of the readers of his fiction in several passages, most notably that of a student who kidnaps Eeyore and leaves him at a Tokyo train station because he disapproves of the author's political stances. K's overall family life is left largely untouched until the end, with the author choosing instead to allude to his son's experiences through references to Blake's works, which become the subtext as Eeyore finally begins to compose and perform music and then to claim his real name and identity. This is a deceptively modest, powerful book by a master at the height of his literary powers. Whether he's expanding on a mystical or philosophical concept or painting an achingly poignant picture of a unique father-and-son relationship, Oe contrives intensely memorable images of these two special characters and their thoughts, insights and loves that will stay with readers.