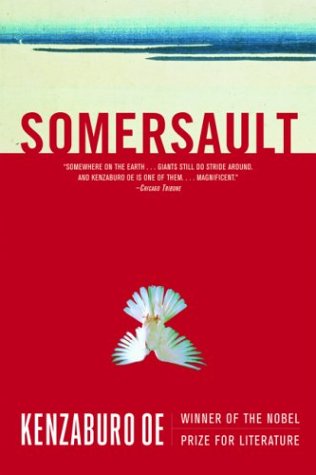 Nobelist Oe's giant new novel is inspired by the Aum Shinrikyo cult, which released sarin gas in Tokyo's subway system in 1995. Ten years before the novel begins, Patron and Guide, the elderly leaders of Oe's fictional cult, discover, to their horror, that a militant faction of the organization is planning to seize a nuclear power plant. They dissolve the cult very publicly, on TV, in an act known as the Somersault. Ten years later, Patron decides to restart the fragmented movement, after the militant wing kidnaps and murders Guide, moving the headquarters of the church from Tokyo to the country town of Shikoku. Patron's idea is that he is really a fool Christ; in the end, however, he can't escape his followers' more violent expectations. Oe divides the story between Patron and his inner circle, which consists of his public relations man, Ogi, who is not a believer; his secretary, Dancer, an assertive, desirable young woman; his chauffeur, Ikuo; and Ikuo's lover, Kizu, who replaces Guide as co-leader of the cult. Kizu is a middle-aged artist, troubled by the reoccurrence of colon cancer. Like a Thomas Mann character, he discovers homoerotic passion in the throes of illness. Oe's Dostoyevskian themes should fill his story with thunder, but the pace is slow, and Patron doesn't have the depth of a Myshkin or a Karamazov—he seems anything but charismatic. It is Kizu and Ikuo's story that rises above room temperature, Kizu's sharp, painterly intelligence contrasting with Ikuo's rather sinister ardor. Oe has attempted to create a sprawling masterpiece, but American readers might decide there's more sprawl than masterpiece here.