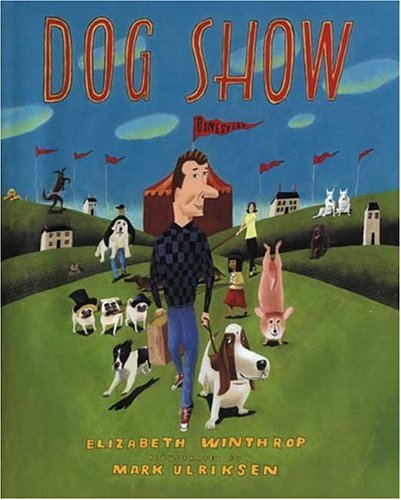 Every dog has his day—and his dog-show event—in Winthrop's ( ) waggish tale of a low key pooch and his enthusiastic owner. Harvey eagerly awaits the day of Bonesport's annual dog show, but Fred, the canine being coached for competition, can barely muster a woof over the commotion. Entered in every pertinent category, from "Dogs with Spots" to "Dogs Who Can't Stand Still," Fred sports his (amusing and droopy) game face, but comes up empty even in the "Dogs in Costumes" group, for which Harvey has diligently prepared. Luckily, Fred is a pup who shows persistence and panache, qualities that get him—and Harvey—appropriately noticed, and awarded a special blue ribbon. Winthrop weaves a gentle tale about appreciating one's uniqueness and spices it with an air of dry wit. Ulriksen, in his picture book debut, matches the mood with droll, kickily colored acrylic paintings of man and his best friend. The human portraits pale next to the canine cast, but Fred's wry expressions, relayed via sleepy eyes, low-hanging ears and expressive mouth could well take Best in Show. Ages 4-9.