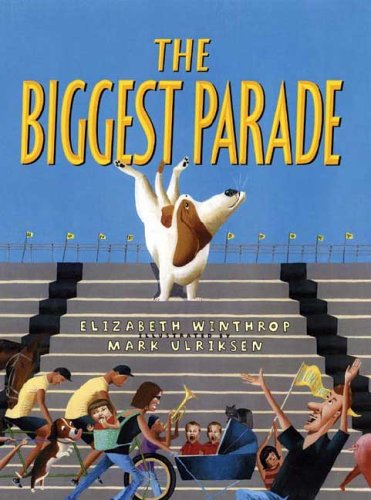 This follow-up to is even more fun than its predecessor, thanks to a clever plot twist. Once again, the basset hound Fred and his beloved owner, Harvey, are at odds. Harvey has been appointed chairman of his town's 250th anniversary parade, and he wants Fred to have a starring role, "dressed as the founding dog of Bonesport." But Fred—with his long-suffering, poker-face visage—isn't biting: "The last time Fred was in a parade, someone put a baby on his back, and someone tied a flag to his tail, and... someone blew a horn in his ear. Fred couldn't hear for week," writes Winthrop, whose wry reportorial prose makes this a terrific read-aloud. Is Fred willing to let the parade pass him by? The answer is yes, and fortunately so: with everybody else marching, Fred is the only spectator—and it's a job that he embraces with brio. Ulriksen (whose work has appeared on covers), is a stylish, ironic painter, but he's clearly put a lot of heart into his work here, too. With a comically florid palette and witty framings (he has an unerring sense of where the focus of a composition should be), he conveys Fred's hipster stoicism, Harvey's geeky enthusiasm, and the come-what-may love they have for one another. Most important, he makes Fred's ecstatic viewing-stand performance a visual punch line worth waiting for. Ages 4-9.