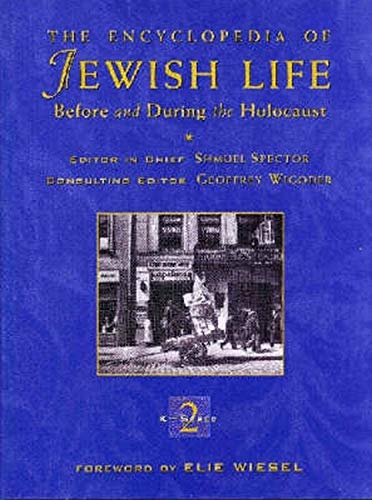 THE ENCYCLOPEDIA OF JEWISH LIFE BEFORE AND DURING THE HOLOCAUST

This majestic three-volume encyclopedia, abridged from a 30-volume set in Hebrew and with a foreword by Elie Wiesel, chronicles Jewish life before and during the Holocaust. Arranged alphabetically by town, thousands of entries explore centuries of Jewish life. Some entries, particularly for large cities, provide information on Jewish residents as early as the Middle Ages and discuss the fate of Jews during the Black Death persecutions (1348–1349) and various pogroms from the 17th to 20th centuries. Each entry provides vital information on the town's Jewish inhabitants on the eve of German occupation, gives the dates of Jewish roundups and mass executions and estimates how many Jews from that community survived the war. Except in very rare cases (as with Copenhagen), the survival statistics are horrifying. But the encyclopedia offers more than statistics: the numbers come to life through more than 600 black-and-white photographs, most of which are from the archives of Israel's Yad Vashem museum. Here we see the vibrancy of Jewish life before the war— theater groups and swing bands, weddings and riotous Purim parties, shops and synagogues. Several of the photographs depict Jewish military units from WWI; others show Jewish young people looking bored in chemistry class or diligently trying to master the violin during orchestra practice. A final 56-page section entitled "In Memoriam" provides unforgettable, haunting photographs of the Holocaust itself. This three-volume set is a required acquisition for libraries and anyone interested in Jewish studies.