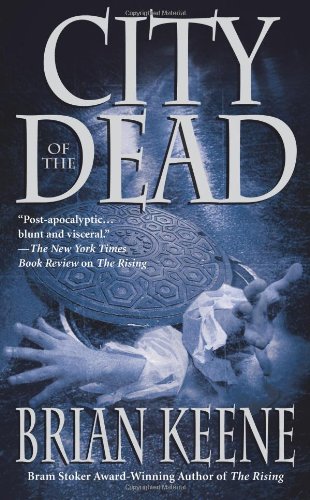 City of the Dead

In this sequel to the Stoker-winning (2003), Keene ingeniously asks, if human corpses can be reanimated, why not dead dogs, rats, sparrows, goldfish, etc.? His other innovation is the news that the zombie swarm is inhabited by demons who are angry at God for trying to exile them in the Void. They want to get revenge by killing everything on Earth, and they are numerous, clever and indestructible enough to accomplish the task. Opposing the demon-zombies are a few living survivors, chiefly an ex-hooker, a young father and his little boy. Finding no shelter elsewhere, they wind up in a fortified Manhattan skyscraper, commanded by an old millionaire who's certain he can outlast any attack. Keene does a fine job keeping the mechanics of the siege clear, while switching viewpoints among his large cast of characters. He's also inventive in imagining ways the human body can be disassembled, with vivid descriptions of torn flesh and spraying fluids. After a while, though, the relentless dread becomes tiresome. Reading this book is like being trapped in a long, gory, unwinnable video game.