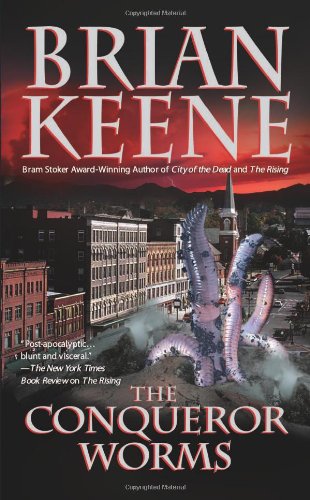 Just in time for picnic season, Keene delivers this wild, gruesome page-turner about two elderly West Virginia good old boys menaced by giant earthworms—and worse. Octogenarian Teddy Garnett tells this story of a global flood that has left humanity in tatters. Holed up in his mountain home, Teddy and his buddy Carl Seaton struggle through daily life, puzzling over things even stranger than a 40-day rainstorm, including the giant slime-coated holes that keep showing up in Teddy's yard. Before long, Teddy and Carl are fending off man-eating earthworms the size of buses. A helicopter crash nearby brings Kevin and Sarah, the last two survivors of an outpost in Baltimore, into Teddy's story; their tale makes up the even more bizarre second part of the book that explores, graphically, the insanity doom can inspire. It all leads to a slam-bang showdown back at Teddy's house with a creature so monstrous it scares even the killer annelids. The awkward framing story—a crushed, dying Teddy writing the novel in a notebook in the tale's aftermath—though a nod to H.P. Lovecraft and H.G. Wells (both obvious influences), can detract from the plot's urgency. Clunky dialogue also slows the action, but the enormity of Keene's pulp horror imagination, and his success in bringing the reader over the top with him, is both rare and wonderful, and more than outweighs these small concerns.