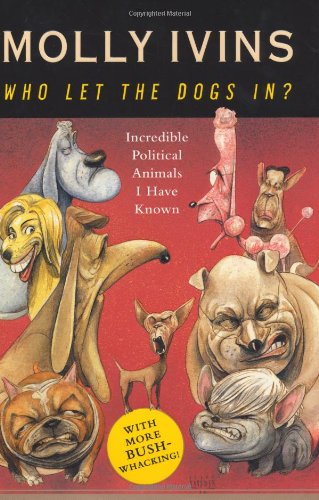 WHO LET THE DOGS IN?: Incredible Political Animals I Have Known

Covering the Reagan years to the present, this collection includes work from three Ivins books (not including ) as well as other short published pieces. A proud liberal Texan, Ivins's best stuff hits close to home: she declares her home state "the National Laboratory for Bad Government" and pronounces Bush 43 a product of three Lone Star themes: religiosity, anti-intellectualism and machismo (she thinks the last trait faked). She appreciates the often-dirty art of politics—her heroes include Lyndon B. Johnson, Barbara Jordan and Sam Rayburn, who fought and compromised for the greater good—and praises Bill Clinton in that vein. Of Ronald Reagan, she writes, his charm was "not just that he kept telling us screwy things, it was that he believed them all." She sets her sights on a number of Republicans: Newt Gingrich, she says, had an affair during the Lewinsky drama, and she claims that Rush Limbaugh's satire cruelly attacks the powerless; Bush 41 she deems "a lickspittle even when he has a choice." Though she generally has a gentler touch with Democrats, Ivins is tough on John Kerry in the book's introduction: "[H]e seems to suffer from extreme political caution." Then again, she wants regime change, reminding us, "[T]he next time I tell you someone from Texas should not be in the White House, would you please pay attention?"