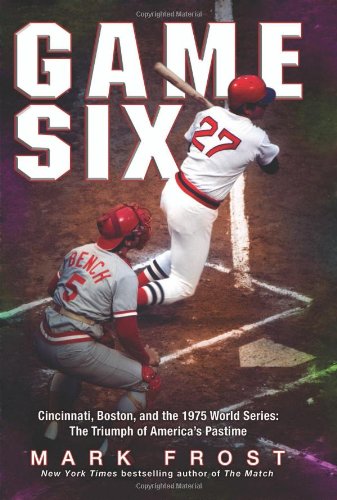 Game Six: Cincinnati, Boston and the 1975 World Series: The Triumph of America's Pastime

Many a diehard baseball fan could tell you how Game 6 of the 1975 World Series ended—with Boston catcher Carlton Fisk dramatically waving his extra-inning home run toward fair territory, and the pandemonium that soon followed. As for the other details, Frost ( ) mentions them all in a wonderful tale about one of the sport's seminal events. Describing pitch by pitch and inning by inning, Frost breaks down the excitement on the field, but also how each participant came to play in the October thriller. Each player has a story—from Boston's star pitcher Luis Tiant and his humble beginnings, to Cincinnati's rugged, trash-talking third baseman, Pete Rose. From Yastrzemski to Bench, Evans to Morgan, Frost covers them all, along with the managers, owners and even broadcasters, expertly weaving from the past to that famous fall night. The last third of the work covers the aftermath of the game, recapping Cincinnati's eventual World Series win in Game 7 (an oft-forgotten fact about that series), and what became of each player in the years following. With each passing baseball season, “the number of people who would later claim to have been at Game Six would increase twenty-fold,” and thanks to Frost, the reader will likewise feel like he was in attendance at Fenway Park for that World Series classic.