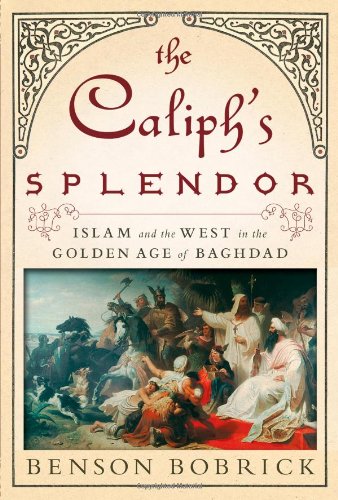 The Caliph’s Splendor: Islam and the West in the Golden Age of Baghdad

Popular historian Bobrick (The Fated Sky: Astrology in History) breathlessly recounts the ornate pageantry of the Islamic caliphate, from its meteoric rise as an empire on three continents, with magnificent cities that were centers of scientific and artistic achievement, through the debauchery and licentiousness that characterized Harun al-Rashid’s late-eighth-century Baghdad. While ostensibly about the diplomatic and military drama encircling the caliphate, the Byzantine Empire, and Charlemagne’s kingdom (al-Rashid sent Charlemagne a white elephant, which the king took as his beloved pet), the book is much more preoccupied with the standard Orientalist tropes of sex and violence. Drawing equally from sober, scholarly works and the fanciful accounts of fabulists reporting or inventing rumors from the caliph’s court, Bobrick has every scene bathed in a postcoital purple haze of opium, wine, and the bloody mist of thousands of beheadings. Each evening, we are told, seven slave girls spent hours sitting on “pierced chairs with incense wafting up from below... thereby made abundantly fragrant, and so readied for Harun’s embrace,” a much needed nightly respite from his busy days of assassinating his rivals, dismembering their bodies, and having them “hung on Baghdad’s three pontoon bridges for all to see.” 16 pages of color photos, 2 maps. Agent: Russell Galen, Scovil, Galen, and Ghosh. (Aug.)
close
Details