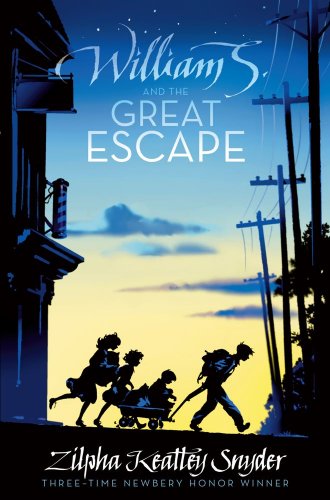 William S. and the Great Escape

William S. Baggett, the skinny 12-year-old hero of this engaging Depression-era story, plans to use his “Getaway Fund” to escape, someday, from his lazy, vicious father and older half-siblings. Meanwhile, William hides from the chaotic, violent Baggett household in a stifling attic nook of their condemned farmhouse, reading Shakespeare and dreaming of the stage (unbeknownst to his family, William played Ariel in a high school production of to rave reviews). Escape becomes urgent after his bullying half-brothers flush his sister Jancy’s guinea pig down the toilet. William, Jancy and their younger siblings, Trixie and Buddy, flee, aiming for their Aunt Fiona’s home several towns away. Throughout their nerve-racking journey, William relies on the Bard to calm and entertain the younger Baggetts, acting out scenes and reciting lines from . The children’s happy reunion with their aunt proves short-lived when their father appears to claim them, though things eventually work out for the beleaguered children. Wit and pluck are rewarded in this quick-paced, high-drama adventure, which may also whet young appetites for Shakespeare. Ages 8–12.