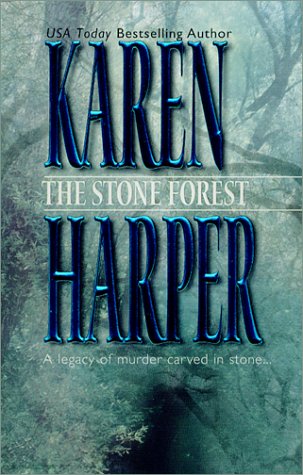 On Jenna Kirk's 16th birthday—the day of her first kiss from her longtime crush, Mace MacCamon, her charismatic older sister's boyfriend—Jenna and her sister, Mandi, are abducted from the yard of their home in a Midwestern quarry town. Several days later, Jenna alone is found wandering in her grandfather's "stone forest" of eerie carvings, drugged, with her memory gone. Fifteen years later, Jenna returns to uncover the truth. But as she regains her memory, someone tries to scare her off, and the culprit may be someone she trusts most: Mace, who was the prime suspect in Mandi's presumed death; Jenna's driven mother, who's utilized the tragedy to become Indiana's first female lieutenant governor; a psychiatrist who has urged Jenna to repress rather than work through her past; or a stalker who's either a Norman Bates–type psycho in women's clothes or Mandi back from the dead. While ex-English teacher Harper's style suffers at times from a tendency toward unnecessary explanation (a treetop scene where Mace puns to Jenna, "Me Tarzan, you Jen" does not require the clarification, "You mean Jane"), her deft juxtaposition of the cast of creepy characters and a smalltown setting oozing wholesomeness makes for a haunting read.