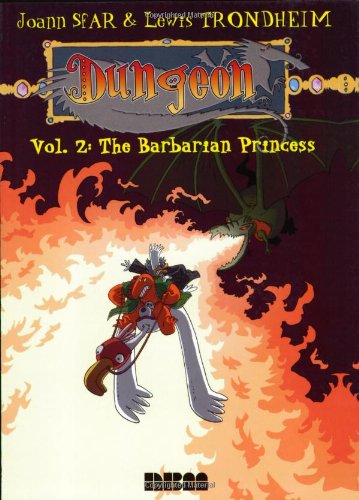 The second volume of this popular French adventure series offers more of the lighthearted, goofy adventures that fans have become accustomed to from Sfar and Trondheim. Sfar has described the Dungeon series as " meets ," which just about sums it up, but doesn't adequately convey the series' added delights. The setting—a dungeon run for profit by an eclectic crew of fantasy characters—is broad enough to encompass all kinds of adventures and personalities. This volume includes two stories, the longest involving a headstrong princess who sneaks into the dungeon to prove herself to her father, and winds up falling in love and having quite an adventure. Later in the book, the dungeon's guardian dragon dies, so a replacement is recruited. Both of these plots allow for numerous asides and, of course, action. The mood runs from whimsical to scary in a matter of pages but never loses its light feel. The artwork is wonderfully detailed cartooning—assured, inventive and always fun to read.