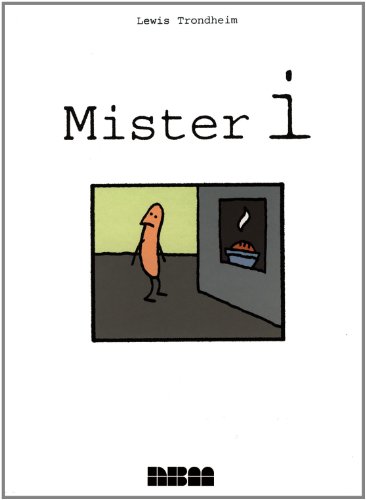 Judging his talent by this newest bit of wan and cackling morbidity, Trondheim is certainly a standout, even amid his talented fellows in the vaguely defined nouvelle vague wave of French cartoonists (David B, Joann Sfar, etc.). Mister I is a barely rendered grade school doodle of a figure (sausage-shaped, stick limbs, pinhole eyes) who trips through one poorly reasoned page-long adventure after another, which all end up the same—with him dead. Each of Trondheim's pages is hacked up into 60 postage stamp–sized panels, which follow Mister I as he assays various doomed tasks, most of which involve playing pranks or stealing food (a pie cooling on a window sill is a recurring and deadly temptation). Somehow, even though the end of each story is known well in advance—Mister I dead in the bottom right-hand panel, a small splurt of blood haloing his head—the book doesn't become repetitious but engenders curiosity. As with Wile E. Coyote, the reader is not bored by knowing the conclusion, but is dragged in to see how Mister I manages to get himself dead this time, whether it's by starting a fight with the wrong guy or by trying to outsmart his inevitably cleverer opponents.