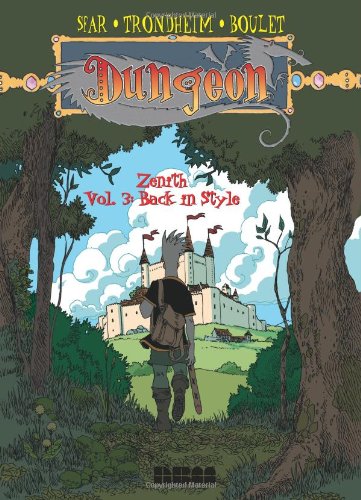 Dungeon Zenith, Vol. 3: Back in Style

It's hard to say if Sfar and Trondheim's long-running Dungeon epic is a dead-on parody of sword-and-sorcery clichés or if it's just a first-rate fantasy series that happens to star anthropomorphic animals and involve lots of comedy. This volume teams the writers up with artist Boulet, whose loony character drawings and elaborately designed scenery use the look of Trondheim's artwork as a springboard. Like every volume of Dungeon's various series so far, it also expands the scope of the overall project—this time moving Herbert the sword-wielding duck and Marvin the vegetarian dragon out of the dungeon itself and establishing some of the culture of the world around it. In the first of two stories, the bankrupt dungeon Keeper is attempting to avoid having the dungeon repossessed by a creditor and his hilariously unstoppable lawyer; in the second, Herbert revisits the city from which he was exiled and finds himself embroiled in a very odd coup attempt. Boulet handles the action set pieces and slapstick farce with equal aplomb, and Trondheim and Sfar shake up the tone of the story every few pages: there's romance next to brutal violence, and tender whimsy punctuated by cruelly bleak humor.