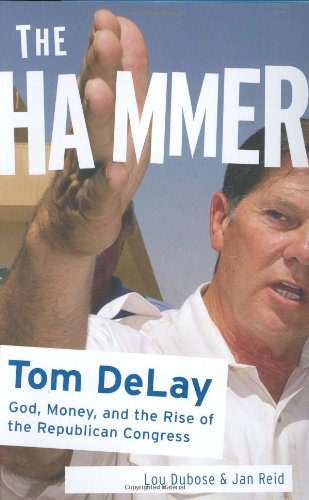 THE HAMMER: Tom DeLay:God, Money, and the Rise of the Republican Congress

In this critical biography, veteran Texas journalists Dubose and Reid tell the story of the boy from Sugarland, Tex., who rose from smalltown exterminator to majority leader of the House of Representatives, earning the nickname "the Hammer" along the way. All the major episodes of DeLay's career are vividly covered: his rise through the House ranks, the coup against Speaker Newt Gingrich, how DeLay built his formidable fund-raising operation and (allegedly) bullied the lobbyists of K Street into towing the GOP party line, his alliance with right-wing Zionists (Christian and Jewish), and his disdain for Bill Clinton. The book is written from a progressive perspective, and the authors do not engage in substantive policy discussions about the merits of DeLay's ideas. There is no examination, for example, of the literature on the efficacy of government regulation—Dubose and Reid simply assume that Delay's hardcore deregulation position is bad. For them, the House under Delay is "no longer a deliberative body" but rather functions as a "plebiscitary" system that merely rubber-stamps the wishes of the Republican leadership. They do, however, affirm that DeLay's positions are sincerely held—that he is a "conviction politician" who may be cynical about process but not about substance.