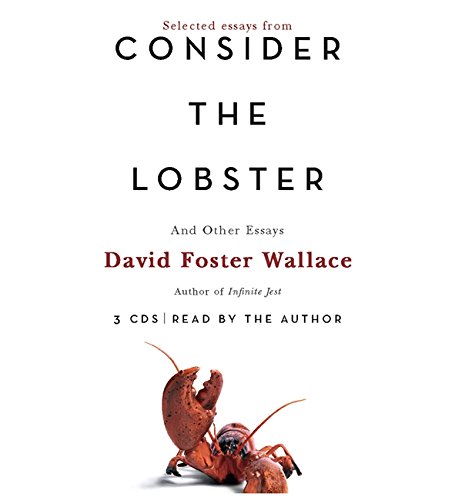 Consider the Lobster & Other Essays

This audiobook is like no other—not for the fabulous essays or deft narration, but for its inclusion of footnotes. Audio footnotes? It's quite simple. When Wallace reads his plentiful footnotes, which as fans know are anecdotal asides rather than bibliographic references, his voice changes tone. At first, this audio wrinkle sounds odd. But the novelty quickly fades and the parentheticals play as effective and amusing a role as in his print work, perhaps more so since here flow can be better maintained. Wallace dissects various subjects—lobsters, porn, sports memoirs, September 11—through Midwestern eyes. Smart and incisive, he always goes deep and follows threads of thought to their vanishing points, often in witty (though never a self-consciously clever) manner. His delivery is dead-on and fresh, the words often springing from his mouth as if conceived on the spot. His voice mostly hovers a notch or two above monotone, imbuing the material with equal parts wonder and skepticism. Though this collection comprises a mere four hours on three discs, Wallace's depth and breadth creates the sensation of a larger narrative—an audible confirmation that modern American writing continues to gain strength.