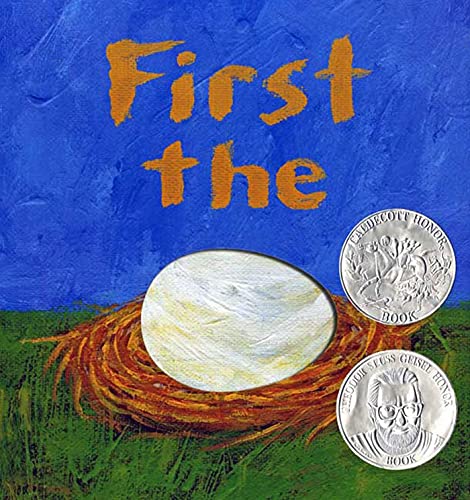 In another nimble page-turner, Seeger ( toys with die-cuts and strategically paired words. She introduces a chicken-or-egg dilemma on her book’s cover, picturing a plump white egg in a golden-brown nest. Remove the die-cut dust jacket, and a hen appears on the glossy inner cover. The eggshell, thickly brushed in bluish-white and cream, also serves as the chicken’s feathers. This “first/then” pattern is repeated (“First the egg/ then the chicken./ First the tadpole/ then the frog”), with a die-cut on every other page. By flipping a page, readers see the cutout in two contexts. For instance, when an ovoid shape is superimposed on a white ground, it’s an egg; on a yolk-yellow ground, it’s the body of a baby chick. Seeger lines up the recto and verso of every sheet, maintaining a casual mood with generous swabs of grassy greens, sky blues and oxide yellows on canvas. Given the exuberant imagery, the occasional cutout (like the fingernail-size seed of a blowsy peony-pink flower) looks none too impressive. But if minuscule die-cuts seem barely worth the trouble, they do imply the potential in humble sources. Seeger’s clever conclusion brings all the elements together in an outdoor scene that returns readers to the opening: “First the paint/ then the picture… / First the chicken/ then the egg!” Ages 2-6.