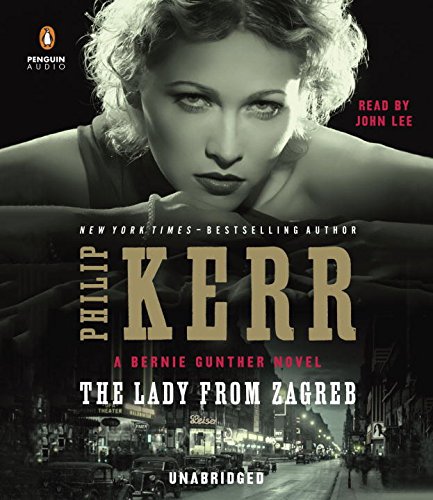 The Lady from Zagreb

The 10th book in Kerr’s Bernie Gunther series (after A Man Without a Breath) is largely set in 1942 Berlin. This time, Bernie, an officer in the SD, begins to serve at the beck and call of Josef Goebbels, the Nazi Minister of Truth and Propaganda, whose main interest of the moment is Dalia Dresner, a beautiful young actress he is promoting as “the German Garbo.” Dalia enlists the help of Bernie to find her estranged father, who she thinks is in a monastery in Yugoslavia. She wants Bernie to deliver a message to her father asking him to come to Germany to see her. After she and Bernie begin an affair, he agrees to make the trip, traveling across the dangerous countryside and discovering that instead of being a monk, Dalia’s father is the cruel, fascist commandant of an infamous Yugoslavian concentration camp. Reader Lee gives the commandant a surprisingly cordial, Austrian-inflected accent, similar to that of Dalia. Lee’s Goebbels is outgoing, with more than a hint of smug amusement in his speech. Many of the German officers have a sardonic curl to their conversation, twisting simple statements into smarmy innuendo. Bernie, the narrator of the novel, is Lee’s best vocal creation; his crisp British delivery sounds insouciant, sarcastic, and self-effacing—a perfect match for Kerr’s flippant Nazi- and self-loathing hero. A Putnam hardcover. (Apr.)
close
Details