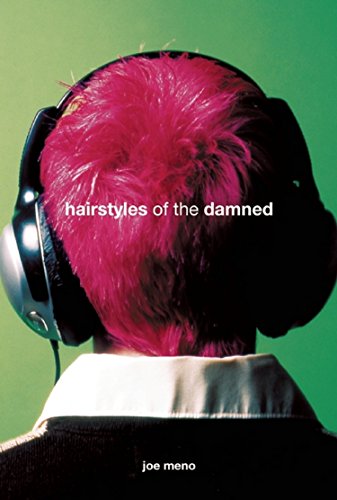 HAIRSTYLES OF THE DAMNED

Meno ( ) gives his proverbial coming-of-age tale a punk-rock edge, as 17-year-old Chicagoan Brian Oswald tries to land his first girlfriend and make it through high school. Brian loves video games, metal music and his best friend, Gretchen, an overweight, foul-mouthed, pink-haired badass famous for beating up other girls. Gretchen, meanwhile, loves the Ramones and the Clash and 26-year-old "white power thug" Tony Degan. Gretchen keeps Brian at bay even as their friendship starts to bloom into a romance, forcing him to find comfort with the fetching but slatternly Dorie. Typical adolescent drama reigns: Brian's parents are having marital problems, he needs money to buy wheels ("I needed a van because, like Mike always said, guys with vans always got the most trim, after the guys who could grow mustaches"), he experiments with sex and vandalism. Meno ably explores Brian's emotional uncertainty and his poignant youthful search for meaning, both in music and in his on-again, off-again situation with Gretchen; his gabby, heartfelt and utterly believable take on adolescence strikes a winning chord. Meno also deals honestly with teenage violence—though Gretchen's fights have a certain slapstick quality, Brian's occasional bouts of anger and destruction seem very real. He's a sympathetic narrator and a prime example of awkward adolescence, even if he doesn't have much of a plot crafted around him.