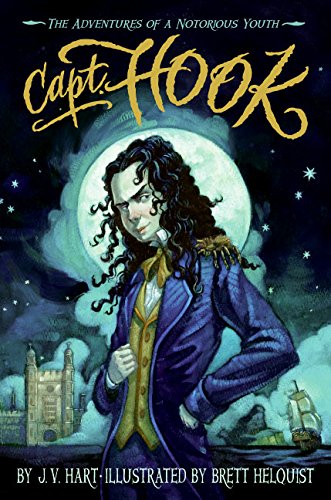 Swimming against the books-to-film tide, this novel from the screenwriter of Steven Spielberg's attempts to explain how the captain's childhood made him the nefarious pirate he became. (It's his father's fault.) The author takes the scant details about Hook in J.M. Barrie's ("piercing" blue eyes, mustard-colored blood, a fondness for trends set by King Charles II) and spins them into a backstory beginning the day 15-year-old James, the illegitimate son of "Lord B," arrives at Eton. The upperclassmen, led by house captain Arthur Darling, identify him immediately as in need of comeuppance and hang him with the moniker James Matthew "Bastard." (Readers never learn James or Lord B's real last name—is the author suggesting Hook was Barrie?) A sharp student and accomplished swordsman, James relishes the notoriety. He and best friend, "Jolly Roger" Davies, become victims of vicious hazing, but perpetrators of equally nasty revenge. They triumphantly lead the underclassmen to victory against Darling's gang in a traditional Eton game, while the Queen and a visiting princess (for whom James falls) look on. James leaves Eton in a blaze of glory, but the story slogs on past this natural end. The author attempts to turn the heretofore conscienceless James into a hero when the fellow saves some Africans from a slaver's ship. The dialogue adds sparkle ("Topping swank!" is a compliment of the highest order) as do Helquist's occasional full-page black-and-white drawings, which emit an air of swashbuckling brio often missing from the text. Ages 10-up.