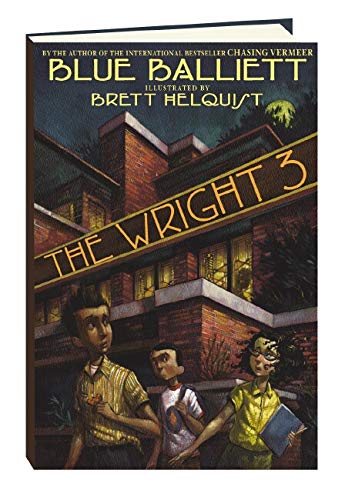 Unlike the set-up in Balliett's , no crime has been committed—yet—when Petra, Calder and Tommy begin the final weeks of sixth grade in the University of Chicago's Laboratory School. But the class does wonder if it's "murder" for the university to demolish a 1910 Frank Lloyd Wright house it owns, and sell off the pieces to different museums (an author's note reports that the real Robie House was almost demolished twice, and that pieces of Wright houses reside in museums the world over). Those who enjoyed the first adventure will be quickly drawn in once more by the charmingly subversive Ms. Hussey who, with her students, hatches a plan to preserve the building. They decide to cut up posters of fine art in front of the house, to demonstrate that, as Petra puts it, "cutting it up would be the same thing as cutting up a priceless painting." The project morphs into an obsession for "the Wright 3": Petra suspects a mysterious stranger is linked to subterfuge surrounding the house; Calder notices that the home is like a giant-size version of his set of pentominoes, and Tommy unearths an ancient jade fish on the grounds that may have been Wright's lost talisman. The blue M&Ms from the first book have been replaced by red gummy "herrings," but other ingredients remain—a sophisticated subject spiced by puzzles, codes and a soupçon of danger—as the titular trio works to stop the wrecking ball from swinging. Ages 8-12.