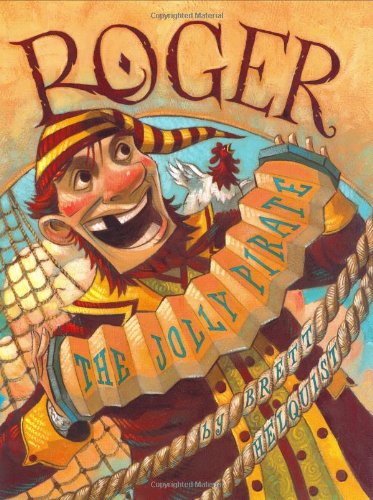 The illustrator of Lemony Snicket's Series of Unfortunate Events, Helquist escapes the confines of those small-format titles to produce exceptionally dynamic spreads for his first book as both author and artist. Unfortunately, the story may well leave readers at sea. Because Roger the pirate is always in a bubbly good mood, "his shipmates called him Jolly Roger. They didn't mean it nicely." Despite being surrounded by sneering buccaneers who pick their teeth with scimitars and glare from under bushy eyebrows, Roger happily plays his squeezebox on the deck, accompanied by a crowing white rooster (not a parrot) on his shoulder. His earnest smile and elfin features contrast with the foxy smirks of his beaky-nosed compatriots, who exclude him from their villainy: "If they planned to board an enemy vessel, make a prisoner walk the plank, or bury stolen treasure, they always sent Jolly Roger down to the ship's hold." One day, the pirates are attacked by the British navy, commanded by an upstanding admiral. Roger, sent belowdecks as usual, decides to win over his shipmates by baking a cake. When Roger lights a match, the resulting explosion leaves him covered in flour and looking like a skeleton, which frightens the good guys into abandoning ship—and inspires the skull-and-crossbones flag now known as the "Jolly Roger." Roger, who wants only to be liked, ends up finding a place among these sinister pirates; it's as if Peter Pan has enlisted with Captain Hook. Ages 4-7.