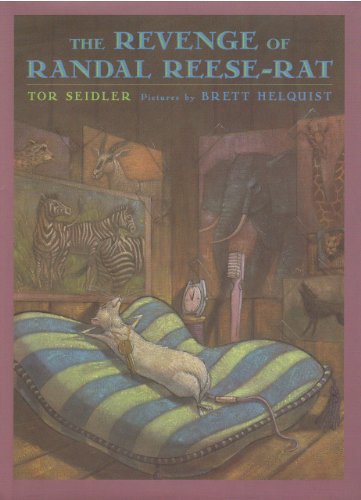 THE REVENGE OF RANDAL REESE-RAT

Fans of may be disappointed in this sequel, which focuses less on Montague Mad-Rat and his eccentric family and more on his rival for Isabel Moberly-Rat's hand, Randal Reese-Rat. The story opens in Africa, where Aunt Elizabeth has traveled to bring her daughter, Maggie, to New York City for the wedding of her cousin, Montague. Monty became a hero in the inaugural novel when his hand-painted seashells fetched a handsome sum, large enough to save the rodent community's wharf. On the wedding night of Monty and his fetching bride, Isabel, an arsonist sets a fire in their home and Randal Reese-Rat is the chief suspect. A "citywide rathunt" ensues, and the jealous (and, as it turns out, innocent) Randal seeks revenge on the rat community that has turned against him. Seidler plants clues to another potential romance as well as the identity of the true arsonist along the way. Though the author's talent for moving fluidly from one character's perspective to another is as evident as ever, the chronological flow is not as smooth here as in its predecessor (the narrative often backpedals to fill in gaps between episodes). And Helquist's drawings, while paying homage to the late Marcellino's earlier portraits of the characters, do not possess their polish or panache. Maggie's comment, as she heads back to Africa, that she felt "she was leaving something of herself behind" hints at a return visit. Ages 8-up. (.)