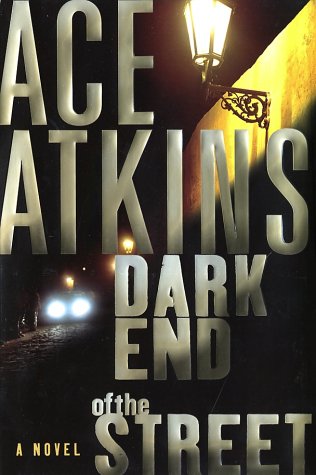 DARK END OF THE STREET

As a follow-up to the well-received , Atkins offers another fast-paced, hot and heavy Southern suspense yarn that only occasionally defies credibility. Nick Travers, a former professional football star who now teaches blues history at Tulane University, is approached by an old friend who wants him to locate her brother, Clyde James, a once famous blues singer who hasn't been seen for some 25 years and may be dead. In a seemingly unrelated event, a young woman visits the home of her parents who were murdered a few weeks before, collects some papers from a hidden safe, then is accosted by two thugs who take her to a Mafia-owned casino and try to force information from her that she doesn't have. Travers happens to be at the casino seeking word of Clyde James and spots the trussed-up woman on a TV monitor. He rescues her, killing a man in the process, and the two go on the run. The action doesn't let up, moving between Memphis and New Orleans as a plethora of Dixie mobsters, hit men, Klan-like Sons of the South and unsavory gubernatorial candidates are stirred and shaken. Some of the characters border on caricature, especially two of the villains, a woman named Miss Perfect and an Elvis–look-alike hit man. The only other false notes in this otherwise sharply observed thriller come in the confusing finale, a not very believable sting operation.