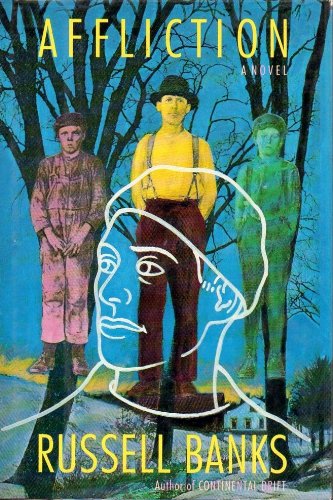 In this masterful novel Banks ( Continental Drift ) returns to the decaying region of Catamount, N.H. Harrowed by snow and bone-freezing cold for the several days of the novel's duration, Lawford is an old mill town, the home of protagonist Wade Whitehouse, 41. Divorced, inept, confused, stubborn, Wade lives in a rusting trailer and works with doglike fidelity at small jobs as the town's cop, well-digger, and snowplow driver. He has abused his family, after being brutalized as a boy by his drunken father, abuse that continues even now. Yet Wade, afflicted with a nostalgic, ``romantic'' streak, wants to rebuild the trust of his ungiving daughter Jill, 10, who tersely judges him through the tiger mask of her Halloween costume (part of the novel's theme of tragic drama). Wade's dream--of making a home for Jill and ``Pop,'' and marrying the goodhearted waitress Margie--slowly erodes. His obsession that a hunting accident is really a murder drives him to violent deeds that may try credibility unless the reader sees the end, like the beginning, in tribal, near-mythic terms. Deerhunters' gunshots punctuate the action; guns and vehicles dominate as conspicious symbols of contradictory male needs to bond and to kill. Wade's fateful story is narrated compellingly by his brother Rolfe, a history teacher who bases his quest for truth on memory, testimony and intuition. 25,000 first printing; $25,000 ad/promo; author tour. (Sept.)
close
Details