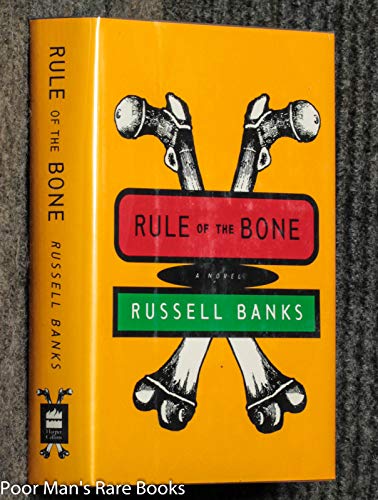 Rule of the Bone

A change in setting halfway through this ambitious novel by the respected author of Continental Drift and Affliction diminishes its effectiveness to a certain degree. The first half, a starkly realistic, powerful portrait of a troubled adolescent whose life has spiraled out of control, packs a visceral punch. Flunking out of school and already hooked on drugs, the 14-year-old narrator, secretly molested by his stepfather, emotionally abandoned by his weak mother, leaves his mobile home in the depressed upstate New York community of Au Sable and becomes a homeless mall rat. In a burst of bravado, he acquires a crossed bones tattoo, changes his name from Chappie to Bone, and attempts to find some focus in his dead-end existence. Convinced that he is destined for a criminal career, Bone vents his anger in acts of senseless destruction. His vulnerability and his need for love and direction are fused when he and a seven-year-old waif he has rescued from a pedophile take refuge in an abandoned schoolbus with an illegal alien from Jamaica called I-Man, whose Rastafarian wisdom and gentle demeanor are fed by liberal consumption of marijuana, which he deals. It is when Bone follows I-Man to Jamaica that the narrative falters. Though the drug-permeated Jamaican milieu is portrayed with impressive authenticity, the improbability of Bone's macabre adventures there frays the plot's credibility. The novel's strengths-Bone's cool, wisecracking voice and colloquial speech, the details of an adolescent's culture-are diluted by its excesses-too many descriptions of marijuana highs, too many coincidences. Yet one finishes the book with indelible sympathy for tough-guy Bone, touched by his loneliness, fear and desperation, and having absorbed Banks's message: that (as he said recently), society's failure to save its children is ``the main unrecognized tragedy of our time.'' 100,000 first printing; $15,000 ad/promo; author tour. (May)
close
Details