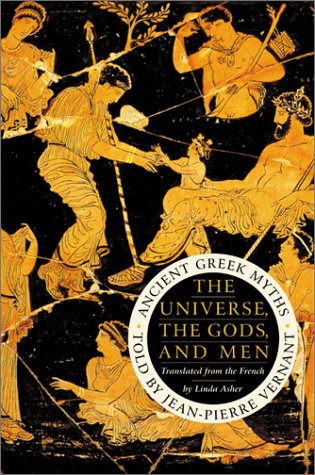 THE UNIVERSE, THE GODS, AND MEN: Ancient Greek Myths

Twenty-five years ago, Vernant's grandson begged his grandfather to tell him some bedtime stories. So mythographer and classicist Vernant (of the prestigious Collège de France in Paris), told his grandson of the exploits of the gods on Olympus, the humans who struggled with them, and those heroes who, favored by the gods, won honor and glory for their peoples. At the same time, Vernant retold these familiar Greek myths to a group of friends, who urged him to write down his narratives. This book is the result, recounting the familiar tales of Prometheus and his theft of fire from the gods, the creation of woman in Pandora, who lets evil into the world when Zeus tricks her into opening an attractive vase, and the heroism of Odysseus in returning to Ithaca despite Poseidon's repeated attempts to stop him. Yet, these are more than simple retellings of the great Greek myths: Vernant interprets the stories as he narrates them, creating a context for the myths within the broader Greek culture that created them, and providing helpful critical insights into the purpose of myth. So, he tells us in a comment on the story of Aphrodite, "the children of Night include flirtatious talk and sexual congress, just as Aphrodite's own following includes a girl's fetching smiles alongside lies in lovemaking." Readers seeking simple and straightforward retelling of the Greek myths are better advised to peruse the conventional sources of Bulfinch and Hamilton. Those seeking a first-rate account of the meanings and origins of the Greek myths, as well as a fresh and absorbing narrative, will find no better guide than Vernant. (Sept. 19)