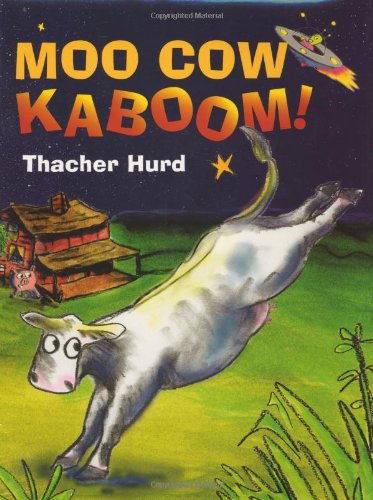 Hurd's () pleasingly quirky tale opens on a full-bleed spread of a peaceful barnyard. But on the next spread, Hurd renders a chaotic scene: the word "Kaboom!" cuts through a jagged outline of the farm as "pigs fell over " and "chickens jumped ten feet," the outer edge surrounded by white space where the chickens fly helter skelter. By the time the farmer appears in his nightshirt, "where his Moo Cow should have been there was just a patch of burned grass." A turn of the page reveals the comical image of Moo Cow jumping over the moon? Well, yes, while tethered to the back of a space ship, having been "cownapped by a Space Cowboy named Zork." Photocollage elements re-create the galaxy on the way to Zork's farm on Planet 246, where Moo Cow becomes the featured attraction at the Inter-Galactic Rodeo for an audience of green-faced, antennaed aliens. With Zork astride her ("Giddyup!"; "Git along, little dogie!"), the cow refuses to cooperate, yet Zork's onslaught of insults spur her on to grab the fellow as her dancing partner. In a series of spot illustrations, she whirls and twirls him on two hooves before catapulting him back to his farm ("Kaboom!") and riding off into the starry night in the fellow's spaceship. Hurd's madcap art features a range of funny facial expressions—on aliens and earthlings alike—and attributes some droll asides to the disgruntled bovine traveler. Fans of farmyards and outer space will enjoy this flight of fancy. Ages 4-8.