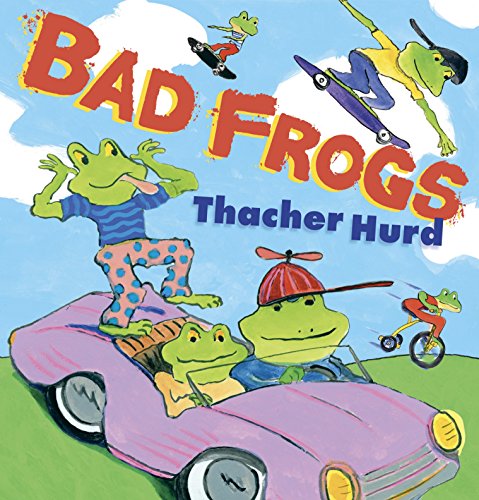 Hurd’s artwork is as exuberant as ever—his portraits of mischief-making amphibians have a ripped-from-the-easel sense of fun, with colors that look like they dried only minutes before readers opened the book. But those who have grown up with Cartoon Network and Nickelodeon may find Hurd’s idea of defying social norms tame: riding motorcycles, burping, “Smelling yucky. Talking crummy. Wearing bad hats. Wearing dark glasses.” (This is not to say that parents will wholeheartedly approve of riding skateboards down the banister or spilling water out of the bathtub.) Curiously, Hurd ( ) doesn’t include a larger society being shocked by these actions—if the frogs live in a world where everyone breaks the rules, what’s the biggie? Even the concluding reassurance that these frogs are unapologetic in their behavior (“They’ll fight with their toothbrushes. They’ll fall out of bed. They’ll be... bad frogs ”) doesn’t make up for their wimpiness as rebellious role models. Ages 3–7.