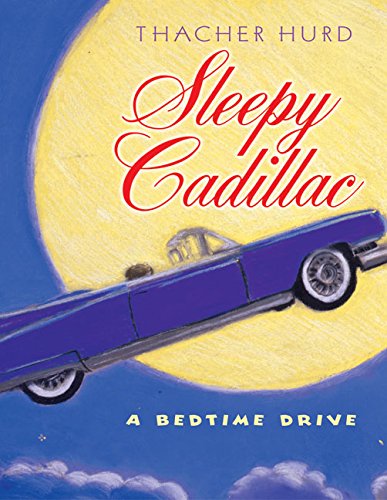 Pleasingly soporific and dream-like, Hurd's ( ) story opens as a vintage blue Cadillac—of the finned variety—floats down a street at sunset. "The Sleepy Cadillac stops/ by your window./ Climb aboard," invites the narrative. A child settles into the driver's seat and the car proceeds to "the dream station," where its tank is filled "with dreams to make the Cadillac fly." In Hurd's softly focused, incandescent pastels, the headlights cut through the darkness and fog as the car glides over the countryside toward the Pacific coastline. In an especially striking and calming spread, readers view a whale and dolphin as the car flies "over the ocean,/ where the whales are sleeping,/ the waves are gently rolling,/ and the dolphins sing/ a sleepy song/ in the deep blue sea." Other antique "sleepy cars" join the Cadillac as the moon guides them to Pajama Land, where children sleep in the clouds. After being dropped off at his window at tale's end, the child slumbers, tucked into bed in his room; kids will be tickled to spy a toy replica of the Cadillac on the bedside table. Hurd's inventive tale cleverly tweaks the standard car theme, introducing a vehicle that floats rather than zooms—and one that will lull rather than rev-up heavy-eyed youngsters. All ages.