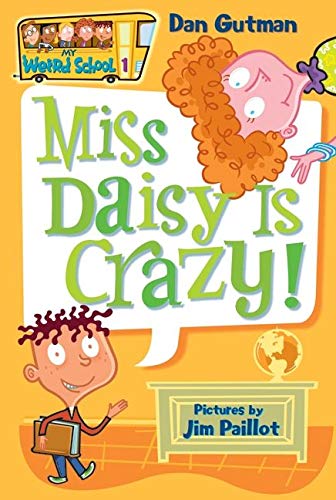 Well tailored for beginning and reluctant readers, this light, appealingly goofy debut tale in the My Weird School series features short chapters, a relatively large typeface and ample cartoon-style illustrations. On the first day of second grade, narrator A.J. introduces himself to his new teacher by announcing that he likes football and video games—and hates school. He and his classmates are shocked when Miss Daisy replies, "You know what, A.J.? I hate school too." And she confides that she doesn't understand arithmetic and that she can't read, slyly soliciting her students' help in both subjects. The kids conclude that she just might be an imposter, but wisely decide not to tell the principal, thinking that she'll be replaced by a "real teacher" who knows the three Rs, and then they'll have to learn "all that stuff." The kids' attempts to educate their teacher allows Gutman to slip a sprinkling of math challenges and vocabulary definitions into his breezy narrative, but the lesson of the day here is fun rather than facts. As affable as Miss Daisy, the school's principal goes to the head of the class in the series' second installment, (ISBN 0-06-050700-4), also due this month. Ages 7-10.