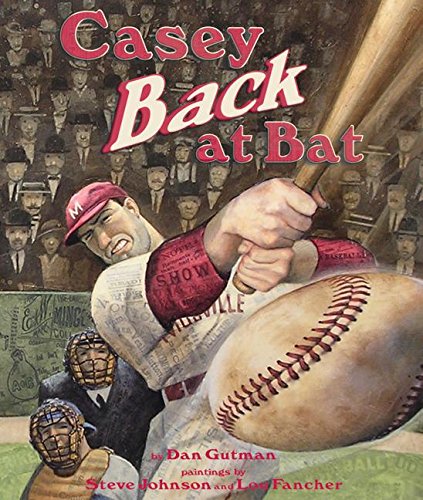 Casey Back at the Bat

What if the scourge of Mudville had another chance? Gutman (the Baseball Card Adventure series) takes a crack at a sequel to Ernest Lawrence Thayer's in his picture book debut. With two outs, two men on base and his team down three runs to one in the final inning of the season's last game, Casey lets two balls go by, and then, a miracle—he hits it out of the park. Indeed, the ball not only travels around the world (it nearly beans a bird, and strikes a certain tower in Pisa) but also goes back in time (past dinos) and into outer space. Unfortunately Gutman's jarring modern phrasings and bumpy rhythms are a far cry from Thayer's comic stylings, (e.g., "In the depths of outer space, an astronaut named Janet/ shrieked, 'Eureka! I have found it! I've discovered a new planet!'/ Her partner took a look and told her, "Janet, in your dreams./ I've yet to see a planet sewn together at the seams' "). But Johnson and Fancher ( ) step up to the plate. With burnished-tone pictures cleverly textured with everything from vintage newspapers to a henna pattern on a pair of Indian rhinos, the artwork fully captures the spirit of the mock epic. Their chiseled-face Casey seems both deserving of vindication and cruising for a bruising. Which one does he end up getting? Suffice to say that once again, there is no joy in Mudville. Ages 4-8.