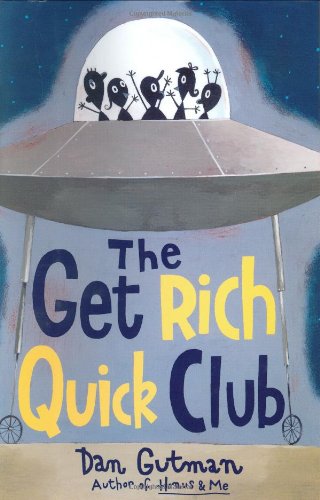 THE GET RICH QUICK CLUB

Gutman's ( ; the Baseball Card Adventures) light, sprightly-paced story introduces a quintet of kids who start a club with the intention of making lots of money—fast. Eleven-year-old narrator Gina ("CEO") believes that money makes the world go around ("My goal is to make my first million by the time I'm a teenager"). She masterminds the club's plan along with Rob, who Gina explains "sees the world differently from other people" and is "probably a genius," Quincy, an Australian girl whose colloquialisms are translated (rather annoyingly) with footnotes at the bottom of the pages; and a pair of eight-year-old twins with a penchant for stretching the truth—very far. After the kids decide against several suggested money-making schemes—marketing microwavable ketchup-filled pillows; writing a rap song ("Rappers make millions of dollars," says one twin)—Rob proposes photographing a phony UFO and selling the picture to the media. The tale grows taller as the twins embellish their UFO story for TV crews and the "sighting" makes national headlines, bringing masses of "UFO nuts" to town. Readers will hardly be surprised when the hoax is revealed, yet Gutman adds an unexpected final twist to this kid-pleasingly over-the-top tale. Ages 8-12.