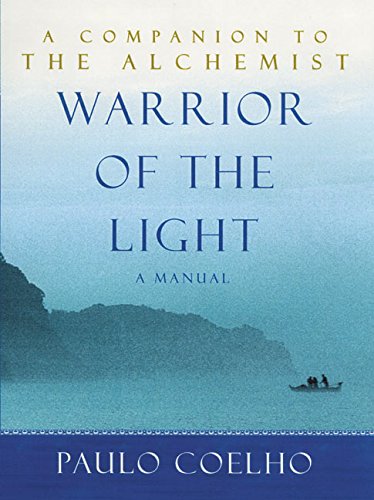 WARRIOR OF THE LIGHT: A Manual

This companion volume to Coelho's popular is an odd hybrid—a self-help manual with fictional overtones; a series of aphorisms and platitudes set within the frame of the sketchiest of parables. In the parable, a boy meets a beautiful woman at a beach, who proceeds to tell him about a hidden undersea temple near a vanished island. The boy fails in his initial attempt to find the temple, though he hears its bells ring, but later, as a grown man, he again meets the woman, who hands him an empty notebook and directs him to write about the "Warrior of the Light," a being who is "capable of understanding the miracle of life, of fighting to the last for something he believes in—and of hearing the bells that the waves set ringing on the seabed." Some of the aphorisms that follow have a specific spiritual source—Lao Tzu, Gandhi, Jesus and Rabbi Nachman of Breslov, among others, are quoted. Coelho provides general spiritual inspiration, but he also offers guidance in more mundane matters, explaining the specific motivations behind childish, immature behavior, cowardly moments, feelings of spiritual emptiness and the reluctance to change. Some of these passages are original, but others merely repackage common inspirational fodder. The volume preserves the basic spiritual tone of , but readers expecting comparable depth and substance will be disappointed.