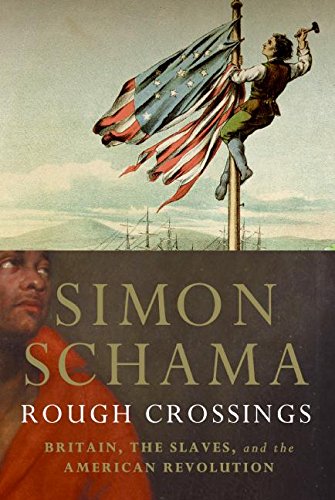 Rough Crossings: Britain, the Slaves, and the American Revolution

Has there ever been a patch of history more celebrated than the American Revolution? The torrent is endless: volume after volume about the glory of 1776, the miracle of 1787 and enough biographies of the Founding Fathers to stretch from the Liberty Bell to Bunker Hill and back again. The Library of Congress catalogue lists 271 books or other items to do with George Washington's death and burial alone. Enough!

By contrast with the usual hagiography, distinguished historian Schama has found a little-known story from this era that makes the Founding Fathers look not so glorious. The Revolution saw the first mass emancipation of slaves in the Americas—an emancipation, however, not done by the revolutionaries but by their enemies. Many American rebel leaders were slave owners. To hit them where it most hurt, Britain proclaimed freedom for all slaves of rebel masters who could make their way to British-controlled territory.

Slaves deserted their horrified owners by the tens of thousands. One, who used his master's last name, was Henry Washington; another renamed himself British Freedom. The most subversive news in this book is that the British move so shocked many undecided Southern whites that it actually pushed them into the rebel camp: "Theirs was a revolution, first and foremost, mobilized to protect slavery."

Even though they lost the war, most British officers honored their promise to the escaped slaves. The British commander in New York at the war's end, where some 3,000 runaway slaves had taken refuge, adamantly refused an irate Washington's demand to give them back. Instead, he put them on ships for Nova Scotia.

And there, nearly a decade later, another saga began. More than a thousand ex-slaves accepted a British offer of land in Sierra Leone, a utopian colony newly founded by abolitionists, which for a few years in the 1790s was the first place on earth where women could vote. Sadly, however, financial problems and the British government's dismay at so much democracy soon brought an end to the self-rule the former slaves had been promised.

Schama once again gives his readers something rare: history that is both well told and well documented. In this wonderfully sprawling epic, there are a few small errors about dates and the like, and perhaps a few more characters than we can easily keep track of, but again and again he manages to bring a scene, a person, a conversation dramatically to life. Would that more historians wrote like this.

Bury the Chains: Prophets and Rebels in the Fight to Free an Empire's Slaves