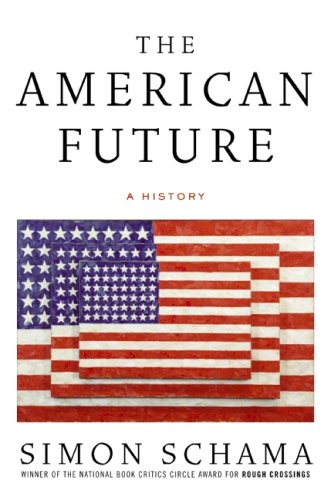 The American Future: A History

Past performance may not guarantee future returns, but it's the best we have to go on, contends this lively meditation on American history. Looking back from the tumultuous 2008 election campaign, historian Schama (NBCC-award winner for ) ponders four themes in American history as they played out in the lives of historical figures: the tension between militarism and liberty in the careers of Civil War general Montgomery Meigs and his family; the progressive influence of evangelical Protestantism on abolitionist and civil rights crusaders; America's conflicted attitudes toward immigrants as seen through the adventures of 18th-century French émigré J. Hector St. John de Crèvecoeur; and Americans' profligate exploitation of the land and water in an elegy for the Cherokee tribe. Schama's wide-ranging narratives wander between contemporary reportage (“For a minute or two after the photo op, George Bush was left to his own devices and came my way”) and fluent, richly literate history. He's alive to irony and hypocrisy in the American story—Mexicans of the 1820s, he notes, shuddered at the uncouth Yankee immigrants flooding into Texas—but Schama is optimistic that the nation's perennial openness and complexity can see it through the storm clouds ahead.