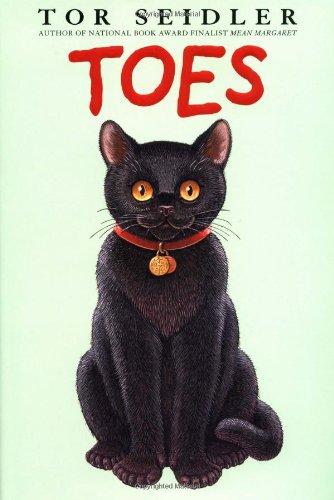 Intermittently striking joyous and sad notes, Seidler's ( ) somewhat unevenly paced, ultimately uplifting novel opens as three siblings arrive home from summer camp thrilled to find the four kittens that their beloved pet delivered while they were away. One of the litter, Toes, so named for the seven toes on each of his paws, is soon spurned by his siblings, who resent his dexterity and superior skill at such activities as playing soccer with a ball of yarn. The narrative moves easily between human dialogue and cat conversation, and the author has fun with the cat's discoveries of television and music. Toes, in an attempt to clean himself up after his vengeful siblings throw him into the litterbox, ventures outside on Halloween night and takes refuge in a basement. The action slows as the lonely feline survives for months (he overhears TV reports of the holidays and "things called valentines"), with just the company of mice who speak to him in rhyme. However, a new, gratifying phase of Toes's life begins when a desperate turn of events prompts him to make his presence known to the house's occupant, a kind, struggling musician who hasn't been able to realize his dream of joining an orchestra, and the two bond immediately. Readers will likely happily suspend disbelief at the music-loving cat's extraordinary intelligence—and the measures he takes to help out his new owner. A warm, unabashedly sentimental story that will particularly please young cat lovers. Ages 8-up.