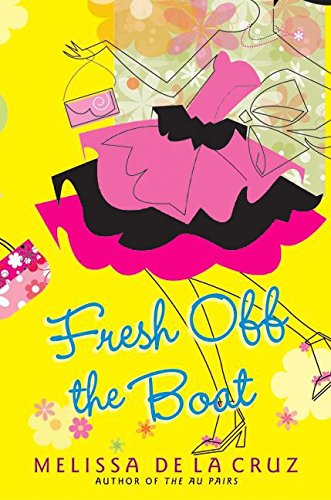 Fresh Off the Boat

After growing up wealthy in the Philippines, 14-year-old Vicenza (called V) is having a hard time adjusting to a much poorer life in the United States. She has no friends at the private girls' school where she's on academic scholarship, she has to work at a cafeteria her mother runs for Sears employees, and she shops for clothes at the Salvation Army. But in e-mails to her best friend back in the Philippines, V doesn't mention that she gets called "FOB!" (fresh off the boat) while walking through downtown San Francisco, instead creating a fantasy life in which she's popular, rich and in a relationship with her cute crush, Claude Caligari. Beyond V's family, the characters come off as scripted (the popular girls are snooty, and Isobel, a French girl and V's first friend, is fun but rather wacky), and the end wraps a little too neatly. But teens can identify with V's longing for acceptance and de la Cruz's ( ) details about Filipino food and culture, as well as what V's family experiences as immigrants, add flavor and authenticity to the novel. Additionally, readers will be touched by memorable scenes between V and her mother who, V finally realizes, is "having as much, if not more trouble, adjusting to life in America." In the end, the colorful details and the mother-daughter relationship make up for some familiar plotting. Ages 12-up.