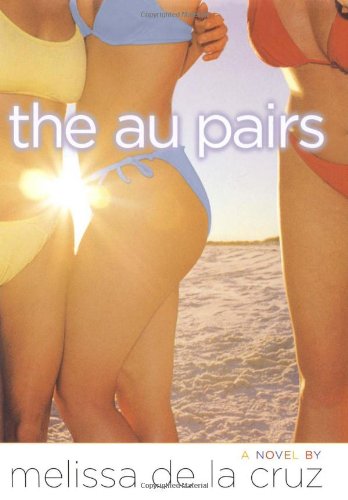 Lurking just below the surface of de la Cruz's ( ) over-the-top fantasy of high life in the Hamptons is a trio of fairly ordinary teen romances. Anna and Kevin Perry (whose power-elite mores and conspicuous consumption recall many parents) hire three very different girls as summer au pairs. Former Park Avenue princess Eliza (recently dethroned and exiled to Buffalo, due to her father's financial shenanigans) wants nothing more than to claw her way back to the top of the social heap—until a romance with dreamy gardener Jeremy causes her to reexamine her values. Mara likes the lavish pay, which she banks for college tuition, plus she finds herself enjoying the vacation from her lunkish boyfriend—and only Mara is even slightly surprised when her friendship with the eldest Perry son turns into something more. Brazilian bombshell Jacqui has come to the Hamptons in search of Luca, the American with whom she had a memorable fling back in São Paolo, who seems the only male in the world to appreciate her mind more than her stunning looks. A flurry of name-dropping, shopping sprees, gala parties and binge drinking may not be enough to distract from the predictability of each plot line, nor to lure readers to further adventures (the stage is set for a sequel when the au pairs are invited back for Christmas in Palm Beach). A beach read without a doubt. Ages 14-up.