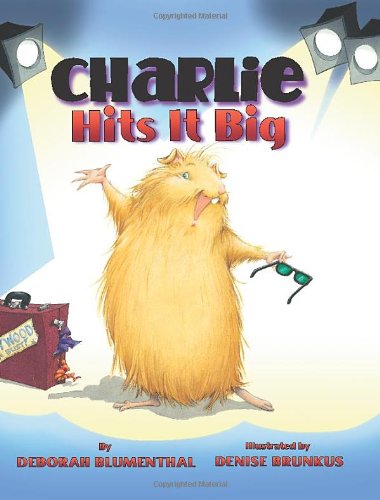 Following in the hoofprints of and Charlie the guinea pig trades in domesticity for stardom in this high-energy variation on a shopworn theme. Sophie is stunned to find Charlie’s cage empty: in Brunkus’s (illustrator of the Junie B. Jones books) characteristically emphatic rendition, the girl’s eyes pop, a bowl drops from one hand and the guinea pig’s food sprays forth from the box she holds in the other. As Sophie’s family begins a search party, the visual gags are stock: a mother in curlers, gravity-defying braids for the little sister, both characters shouting with their mouths open so wide that their eyes close. Eventually they discover a scrawled note (“Off to the coast...”) and an illuminating article on the newspaper that lines his cage (“Pigs Big in Hollywood”). From there Blumenthal ( ) cuts to Charlie’s trip to Hollywood, where he instantly wins a leading role and huge popularity. Almost as quickly, he realizes that celebrity feels hollow, and he quietly returns to Sophie. Brunkus gamely ratchets up the camp—Charlie’s co-star is a pouty Louise Brooks type with a boa, Charlie’s movie-star get-up includes a flowing purple cape and cravat, etc.—but the story doesn’t deliver the sparkle of the gold-foil accents on the jacket. Ages 3-8.